There’s a Twin Beech in our park. What’s that about?

This 1949 Twin Beech Model D18S was flown into the Beaumont Hotel Airport in late January 2012.

Soon after, the hotel learned that this plane has a most interesting history; including links to the CIA, Medellin Drug Cartel, Iran-Contra affair, murder and perhaps the office of the President of the United States. Though much of this history is clouded by misinformation; the factual elements are still compelling. 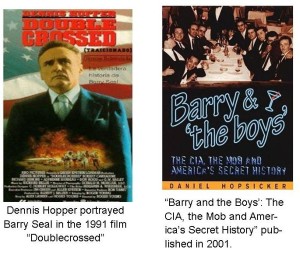 Barry Seal (July 16, 1939 – February 19, 1986), was a drug smuggler and aircraft pilot who flew covert flights for the FBI, Central Intelligence Agency and the Medellín Cartel.

Seal was born in Baton Rouge, Louisiana and began flying at the age of 15. In 1955, he received his pilot’s license at the age of 16 and joined the Civil Air Patrol. He joined US Army Special Forces in order to continue his flight training. In 1966, Seal was hired by TWA as a flight engineer; he later became the youngest 747 pilot in the nation. He flew transcontinental flights for TWA; he was fired after agreeing to fly plastic explosives from Miami to Mexico for an anti-Castro group.  The buyer turned out to be a Federal Agent and Seal was arrested.

Seal began his drug smuggling career in 1976. He initially worked with South American cannabis growers. In 1979 he was arrested in Honduras and jailed for nine months. Once released he met another contract pilot who agreed to introduce him to the Ochoa family. The Ochoas, with Jorge Luis Ochoa Vasquezas their leader, headed the Medellín Cartel. In 1980, Seal began working for the Medellín Cartel transporting cocaine. He led one of the largest transportation rings for the cartel in the United States.

After successful runs into his home base in Louisiana, he moved operations to an airport facility in Mena, Arkansas. There he owned and operated several planes including this one. He also owned a C-123 transport. According to several DEA sources “All of his aircraft were equipped with the most expensive cryptic radio communications we had ever seen at that time.”

In 1984 Seal was indicted on conspiracy to smuggle Quaaludes into Florida. In order to mitigate his arrest, he agreed to testify against his former employers and associates in the drug trade.  Among those Seal testified against were the Chief  Minister of the Turks and Caicos Islands and members of the Medellín Cartel, several were sentenced to prison.

Using a concealed camera installed by the CIA, Seal took pictures during a Nicaragua sting operation clearly showing members of the Colombian Cartel loading kilos of cocaine onto the plane.

Seal gathered this evidence in order to bolster US claims that the Sandanistas were involved in the drug trade. In 1984 Seal flew from Nicaragua to Homestead Air Force Base in Florida with a shipment of cocaine that was allegedly brokered through the Sandinista government. Seal then testified before the President’s Commission on Organized Crime in October 1985.

The Washington Times in 1984 described the infiltration of the Medellín Cartel’s operations in Panama and Nicaragua. The story was based on a purported leak from a Congresswoman Diane Feinstein, she in turn had been briefed by Oliver North. The alleged purpose was to prove the Nicaraguan Sandinistas’ involvement in the drug trade and to build support for the Contra war effort. This leak and subsequent controversy eventually led to the Iran Contra Affair which unraveled a year later.

Despite these pressures, Seal testified the pictures taken during the trip showed Sandinista officials in Nicaragua brokering a cocaine deal with members of Colombia’s Medellín Cartel. Seeking congressional support for the contras, President Reagan showed one of Seal’s photographs on national television and suggested that top ranking Sandinista officials were involved in drug smuggling.

As part of his plea agreement for smuggling Quaaludes into Florida, Seal was ordered to stay at the Salvation Army in Baton Rouge, Louisiana. His lawyers argued this was a death sentence making him an easy target for retaliation. Less than a month later, on February 19, 1986, Barry Seal was shot to death in front of the building. Two Colombian assassins, believed sent by the Medellín Cartel, were apprehended while trying to leave Louisiana soon after Seal’s murder. They were convicted and sentenced to life in prison.

For more information about Barry Seal:

The Café and Restaurant are closed for the winter season and will reopen in the Spring of 2023: